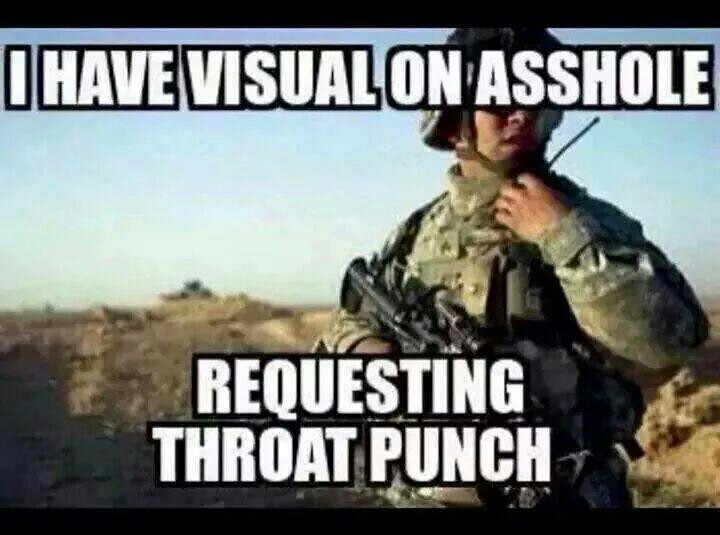 This one’ll (mostly) be about using empty hands. If you have a knife or a pistol then there’s not much to say about targeting the throat – stab it, slash it, shoot it.

There’s basically 3 things you can do to the throat:

– cut off the blood supply

– cut off the air supply

Cutting off the blood supply involves putting pressure to either side of the neck, where the major veins and arteries run (a bit behind the throat).

Cutting off the air supply involves pressure to the front of the throat, to impede air flow or cause the throat to swell up and cut off the air. PIC air choke. This is also the one most likely to make the guy feel like he’s dying, totally freak out, and fight you like a wild banshee on steroids and amphetamines. So use with caution.

Causing pain usually involves direct pressure on the throat, typically over a smaller area than if trying to cut off the air supply completely. (Although air chokes tend to cause a fair bit of pain as it is.)

Let’s start with the one everybody wants to know about (admit it, that’s why you clicked on this article) – killing someone quickly.

The image everyone has is of crushing the guy’s throat, then he grabs his neck in the movie I-can’t-breathe gesture, and keels over dead. It’s bullshit. Crushing someone’s throat is supposed to stop them from breathing. I’d guess most adults can hold their breath at least a minute, minute and a half before passing out. Let’s be picky and add adrenaline and fighting into the mix and say at least 20 seconds until somebody’s unconscious and out of action. Take a moment and count to 20. No really, count to 20. Does that seem quick to you?

If you’re killing some dude in self defense, then what you’re saying is that you’re about to die. As in you’d grab the guy and jump out a 4th floor window because those are better odds than what you’re currently facing. So having the guy die in 20 seconds is pretty useless when he’s going to kill you in 5.

So how do you kill someone quickly using the throat? Cut off the blood supply for long enough. But how is this quick? Because cutting off the blood flow into and out of the brain can put a guy unconscious in a matter of seconds. Then you just keep on strangling him until he’s dead. So technically this doesn’t kill him quick, but it does put him out of action quick.

The basic way to do this is to get behind the guy, wrap an arm around his neck (with your elbow directly under his chin) and squeeze your forearm to your upper arm, squishing the sides of his neck between them. There are fancier ways to do this, some even from the front. Heck, if you’re as talented (and experienced) as Ed Calderon, then you can choke someone from the front with one hand.

Let’s get this out the way, there’s no room in Self-Defense for killing someone slowly (well, I haven’t thought of a “legally acceptable” reason so far). So if you do need to kill someone slowly, it’s either a punishment or for information – and crushing someone’s throat so they slowly suffocate is a terrible way to get information, so you’re basically down to punishment – which, just to make perfectly clear, is not a self-defense kind of thing.

Buuuuut just in case you do need to “punish” someone, read on…

Pain is a great persuader – how many times did it take before you figured out fire hurts? So surgically applying pain can be a great tool. Aaaannnd applying too much pain can make the guy completely freak out and either start fighting (which you were trying to persuade him NOT to do) or else fight 10 times harder than he was. So let’s just say that using pain as a tool of persuasion is a judgement call.

The most basic way of inducing pain via the throat is to jam something into it. You can jam a stick/pen/key into the guy’s throat, or your finger. For extra oomph you can squeeze from both side of the throat to compress it (and even grab the back of his neck to boot), like the Ranger Chokehold from Scent of a Woman.

Something to keep in mind – trying to jam something into the (somewhat rounded) front of the throat is more likely to slip off than if you jam it into the side of the throat.

It’s no secret that I don’t like using pain compliance – there’s too much chance of it back-firing for my tastes, but if you’re going to use it, then I favour using one hand to snag the back of the elbow, them the other hand for the guy’s throat, and talking calmly and quietly into the guy’s ear. Squeeze as necessary, keeping in mind that too much squeezing will probably back-fire and start what you hoped to prevent (him getting froggy and jumping). Having control of the back of the elbow opens up many options (basically turning him to not get hit/get behind him/prevent weapon access etc. etc. etc.)

Now that I’ve gone on and on about how attacking the throat etc. can backfire, doing so can serve an important purpose.

So you’re walking around the mall, doing some Christmas shopping, when you hear “doof doof doof” – Shit, was that gunshots? You’re not sure so you say screw it and grab your wife’s hand and hotfoot it to the closest exit (cause people who aren’t you can’t be trusted to be smart in these kinds of situations). And what do you see but some moron security guard blocking the exit, telling everyone the mall’s on lock-down (trapping everyone inside with the gunman). So you walk up to him looking really scared, push his forehead back and punch him in the throat. Then you grab the wife’s hand again and walk out.

A teacher trying to trap your kid in a classroom so she’s a sitting duck for the crazed gunman (“lock-down procedure in the event of an active shooter incident”)? Walk up to the (most likely distracted) teacher, punch him in the throat, escape to safety. To quote a parenting lesson from Gabe Suarez “You’ll never get in trouble for doing something I told you to do.”

Getting harassed by marauding (“protesting”) university students (Fees Must Fall/BLM/Clinton people) or a pervert on campus? Punch them in the throat and escape. Web of the hand, closed fist, knife edge of the hand (in increasing order of likelihood of causing death). Smack and run. The throat is a pretty decent equaliser for smaller/weaker/ambushed people.

What did we leave out?

– Lots and lots of different choke variations. There are many different Judo/Jiu-Jitsu chokes from all kinds of weird angles and body positions. While nice to know, I’m mostly concerned with the basic chokes (I don’t like fancy, I like seeing “Oh, there’s his throat – let me squish it.”)

– I also didn’t discuss impact weapons very much (like slamming the edge of a laptop into his throat).

View all posts by predefence

2 thoughts on “Targeting – how to attack the throat”